Meet SCAG goon Alan Wapner as he flaps around and calls Grindall61 names instead of looking in that huge mirror at that really big, dark reflection.


Just following orders…. Yes that is the excuse these lackey sellouts time and time again try to feed the lemmings. 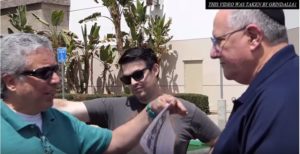 
Wonder why the toll lanes exist instead of more lanes for us? Wonder why they keep building taller and taller buildings while Camp pendleton is left open for the hanta virus carrying rats, squirrels and the military to shoot 50 calibers at old cars?

S.C.A.G. IS A GIANT UNITED NATIONS AGENDA 21 MASSIVE HIGH RISE DEVELOPMENT WRECKING BALL. SCAG uses false population growth estimates to ram massive Agenda 21 high density housing into places it has no business going and to get out us out of cars and onto their various forms of conveyer belts that will restrict our ability to travel freely as we do now. YES THIS WRECKING BALL IS BEING ROLLED AROUND AND SWUNG BACK AND FORTH IN FULLERTON and all over California. You just may be surprised who is letting it. It sure ain’t Joe Imbriano!

SCAG is an Unelected, Unconstitutional Regional Government. SCAG (Southern CA Assn. of Governments) is the largest regional government in the US covering 6 counties and 191 cities. SCAG has a $540 Billion plan to remake SoCal in the next 2 decades and operates in Near Darkness.

95 percent of the US is rural open space and SCAG wants all of you off the land and into the compact cities. Yes folks, they want you living crammed into stack and pack, out of your cars, and crammed into high density housing living like caged rats getting Wifi from all sides, blue light from the idiot box and a million smart meters on a million bedroom walls beaming into your heads with 5G microcells every 300 feet and cell towers everywhere as you dring fluoridated water and are restricted to 50 gallons a day with no way to grown any food. What is Alan Wapner who is the president of SCAG which oversees the 19 million people of 6 Calfornia Counties in terms of implementing Agenda 21 going to – yes do? Well, he is one of the honchos who will try to make sure you follow these immoral edicts designed to cull humanity. In case you forgot, his name is Alan Wapner Watch this total traitor and sellout as he is confronted by Gary Gileno of the Grindal61 you tube channel. No there was no belly bouncing and Alan didn’t eat him but Wapner’s behavior is shameful nonetheless.

Here is Alan Wapner after a big lunch as he poses with his crony pals for a photo op with none other than the most lawless politician to ever set foot in Sacramento, Kevin open border sancuary city la raza racist Kevin Deleon. 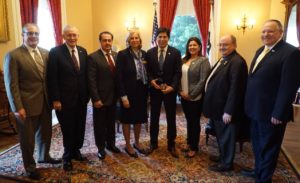 Alan Wapner (far right)-What do they feed these guys as they destroy California?

Wapner went to Sacramento with the SCAG delegation last year and met with Senate President Pro Tem Kevin De Leon to lobby on behalf of the half trillion dollar regional transportation plan. Not long after the SB1 gas tax passed which is in the SCAG document.

Wapner calls Gary Gileno a “loser” as he walks away.

SCAG, Agenda 21 operative Alan Wapner calls Gary Gileno a bum as Alan Wapner heads up a 6 county presidency of the largest unelected regional shadow government in The United States which seeks to through defacto leadership to implement the radical environmental policies and social re engineering components of Agenda 21. 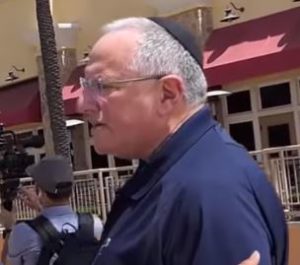 Elitist and sellout Alan Wapner calls Gary Gileno a bum as he wants you out of your cars.
Alan Wapner for about 3 months was simultaneously the President of SCAG and SANBAG. SCAG is the largest metropolitan planning agency in the country. SANBAG now SBCTA is a transportation regulatory agency San Bernardino.

Wapner went to Sacramento with the SCAG delegation last year and met with Senate President Pro Tem Kevin De Leon to lobby on behalf of the half trillion dollar regional transportation plan. Not long after the SB1 gas tax passed which is in the SCAG document. 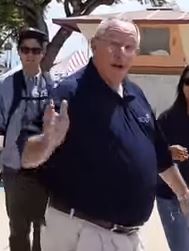 Wapner calls Gary Gileno a fraud as he is confronted for selling Calfiornia down the river of Agenda 21 regional planning.

Wapner also chairs the Ontario Airport Board meetings and was instrumental in getting the airport back in possession of the city of Ontario. Since this has happened Wapner and SB Supervisor Curt Hagman have made deals with China to get flights into Ontario. 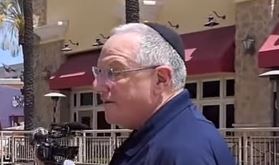 Wapner is SCAG’s appointed high priest presiding over the lives of 19 million people in California who are clueless as to his and his agency’s intentions to radically change our lives and against our will. 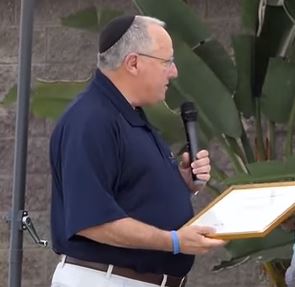 To support the work of Gary Gileno:
Twitter: https://twitter.com/grindall61