WE WILL NOT FORGET OR RELENT - FDNY - LOST BUT NOT FORGOTTEN

On September 11th 2001 I sat in the lounge of my firehouse in New Jersey. By the second crash all hands were on deck. You have never seen so many grown men cry when we played back the audio and heard our brothers lives extinguished. 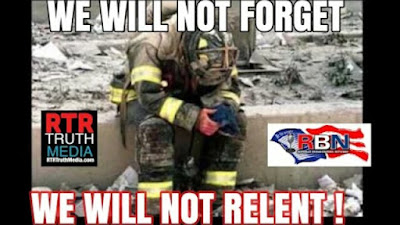 Copyright Disclaimer Under Section 107 of the Copyright Act 1976, allowance is made for "fair use" for purposes such as criticism, comment, news reporting, teaching, scholarship, and research. Fair use is a use permitted by copyright statute that might otherwise be infringing. Non-profit, educational or personal use tips the balance in favor of fair use. Sharing content of individuals not members of our team does not mean we agree with or stand behind everything they stand for. We share news, as well as what we believe our readers need to know. Truth is truth, whomever may speak it.

Posted by RTR Truth Media Staff on September 11, 2020 No comments:

Global demonstrations - while these faux protests began prior to said demonstrations.
Seattle, Portland ... testing grounds for this lunacy. But mass global demonstrations seem to be winning in the sphere of convincing the people that government has become a threat to the world itself. Time the people of the world do a re-set... and I don’t mean a financial one.
High Impact TV = https://www.youtube.com/watch?v=wZYou...
Richie from Boston https://www.youtube.com/watch?v=_czBR...
Tell them RTR sent ya!!! RTR TRUTH MEDIA


Copyright Disclaimer Under Section 107 of the Copyright Act 1976, allowance is made for "fair use" for purposes such as criticism, comment, news reporting, teaching, scholarship, and research. Fair use is a use permitted by copyright statute that might otherwise be infringing. Non-profit, educational or personal use tips the balance in favor of fair use. Sharing content of individuals not members of our team does not mean we agree with or stand behind everything they stand for. We share news, as well as what we believe our readers need to know. Truth is truth, whomever may speak it.
Posted by RTR Truth Media Staff on September 05, 2020 No comments:

Brendon O'Connell
10.7K subscribers
DELETED BY YT UNDER "COMMUNITY GUIDELINES", APRIL 24, 2020.
VIDEO ON BITCHUTE: https://www.bitchute.com/video/H5nakR...
UN Refugee Application | Brendon Lee O'Connell - 100MB PDF file
https://mega.nz/#!x6hDWYaR!GOaK-TCZBF...
War in the South China Sea, June-August 2020. Hopefully it will be contained. The "threat of war" will be enough to cause major trade dislocation, shortages of every kind and full blown, in the open, martial law and direct government (Israel) control of goods and services - food, food transportation and food distribution. Combined with the Corona lockdown, it is the end of the American Republic. It's over. According to Alex Jones, Donald Trump [say this breathlessly - chew your popcorn], is baled up in the Oval Office, besieged by Nancy Pelosi and an army of "deep state" hob goblins making his last stand ala Yassar Arafat style in the PLO Headquarters in the 90's. Donald Trump is the President of the United States: imbued with dictatorial powers of executive authority under The War Powers Act. He can literally do what ever he wants under the guise of "national security". Arbitrary arrest. Forced opening of businesses and trade under threat of immediate imprisonment. But Donald Trump does nothing...Nancy Pelosi and AOC have him by the balls...dancing on roof tops...he's helpless...and Melania has her "I Dont Care" jacket on.
Donald Trump attended numerous Jeffrey Epstien events - just ask Roger Stone. Stone stated on Infowars three years ago that yes, indeed, they had been to a Jeff Epstein event and noted the "very young girls" playing in the pool. Stone stated, "We thought Jeff was a great guy allowing the next door neighbors kids to use his pool." Stone assured the Infowars listeners that he and Doanld - friends for 40 years - left immediately when they saw Jeff's playful teenie bopper entourage...they escaped in a nick of time! All that Adderal and Coke in Stone and Trump's systems assisted their rapid getaway from the impending crime scene. A year later, Jones (coming down off his coke and Adderal binge under orders from Dr Steve Pieczenik, and Dr Henry Kissinger), stated he had been courted by Hollywood for years - see, you all missed this because you don't torture yourselves like I do and watch Jones.
From 2008 to 2012, Jones went back and forth to L.A from Austin at $10,000 a time doing voice overs and auditions - these are his own admissions. He was hanging with the AIDS infected coke and porn fiend Charlie Sheen and coke nut Gary Busey. Luckily, Jones being a good and pious Christian, calling on the power of The Holy Spirit, resisted the temptations of the flesh and nasal stimulation. After 4 years and a few hundred thousand dollars later (that we know of), Jones saw the evil that was Hollywood and proceeded to become a pious monastic, crying loudly from the wilderness of his Austin multi million dollar studio...buy my bone broth! The end is near! At $20,000+ USD a WEEK, in his pocket...profit. He truly suffered for his craft. Jones further admissions were that during his divorce he partied at the ranch of the lead engineer of the Boeing F18 fighter jet. Alotta blondes, beer and AR15's were had...being a red blooded male that Jones is. In fact, Jones keeps telling us non stop he is a "red blooded male" and it brings me to the point of,
"He doth protest to much..."
... did Jones getting a little high with Charlie and the gang in L.A one night and decided to give naked pole dancing a go? Just once...to make sure he was truly deep red blooded? For science.... Who knows, but strange things happen to the minds of mighty men when imbued with muchos stimulants in L.A. Even i was willing to give trump a chance. A chance that the US military must act, via the orange monkey and his signature. If the United States does not open immediately for business - you can throw away the 5D chess game, no if's and no but's. Donald Trump works for Bi Bi and The Bolsheviks. It's over. The Republic has been killed...we just watched it. Live on you tube. They have penetrated every level of the US high technology sector. The Bolsheviks and their high tech scientific rationalist system have finally won in the age of AI, Cambridge Analytica, Peter Thiel, Elon Musk and Alex Jones. Public Data Doesn’t Capture Extent of Chinese-Israeli Deals, Says Investor https://www.calcalistech.com/ctech/ar...
Acc Name: Brendon L. O'Connell
Bank: St George Bank, Perth, Central Business District Acc No: 055164731 BSB: 116879
SWIFF Code: SGBLAU2S PATREON https://www.patreon.com/talpiot
BTC - 12b5rUKgGBcnswh1JqsymvrzETvRGW5PND
Bit Coin Cash - qpxtaj66vqnh4ra8g0nhu9kxy3267j7g5uu9nqgwz8
Ethereum - 0x21c6d2268806cb03579BD13A6d33f73DCb6Efc5B
Litecoin - LYiHjTjzhC9RXZRWyznpG9UYyt2Frmn2LE
Posted by RTR Truth Media Staff on September 03, 2020 No comments: