A local to Bunkerville Nevada approached me with information regarding his neighbor - a Fed Ex driver who had been stopped by the Federal Bureau of Investigation seeking to inspect his logs to obtain information of what they said was alleged "illegal ammunition" that was delivered to the Bundy Ranch. As the Ranch was receiving thousands of packages and the head of security was Booda... I took it to him. He told me not to worry about it, and he never investigated. As the son of a Judge I knew that if the package was signed for it could be grounds for a raid having nothing to do with the cattle operation and even potentially involve the ATF. We all know how that has turned out in the past. I became persistent to investigate the matter and Booda had me escorted off the ranch at gunpoint. I did not give up. I made it known that we knew, and I went and got the local and brought him directly to Cliven. At that time forward I stayed in the yard until departing back home. This is the testimony from that local.


This was previously terminated and censored. Thanks to Rudy and Erin Davis who preserved my channel I finally now have my files back in my possession.
RTR TRUTH MEDIA Resurrect the Republic Truth Radio Broadcast
http://RTRTruthMedia.blogspot.com
http://ResurrectTheRepublic.com
You can check us out on the following links
Donate - https://PayPal.me/RTRTruthMedia 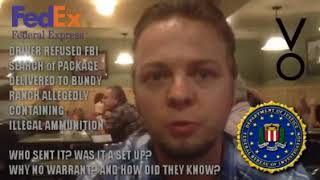