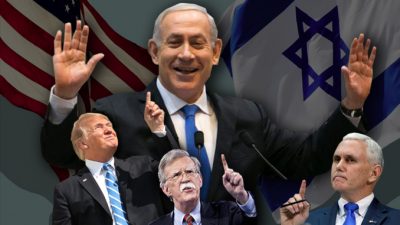 Note to readers: please click the share buttons above
On September 6, Foreign Policy (FP), an establishment media  discussed Israel’s “secret program to back Syrian rebels” – code name for terrorists, supported by the Trump and Netanyahu regimes, along with NATO, and anti-Assad regional states, including Turkey.
Throughout Washington’s war in Syria, now in its 8th year, falsely called identified as a “civil war”, the US and its allies sought regime change – wanting pro-Western puppet rule replacing Syrian sovereign independence, Iran isolated ahead of a plot to topple its legitimate government.
That’s what imperialism is all about, seeking dominance over other countries, naked aggression a favored strategy.

FP’s report was picked up by Haaretz, the Times of Israel, and other Israeli media.
According to FP,


“Israel secretly armed and funded at least 12 rebel groups in southern Syria that helped prevent Iran-backed fighters and militants of the Islamic State from taking up positions near the Israeli border in recent years, according to more than two dozen commanders and rank-and-file members of these groups.”

Fact: Iran has military advisors in Syria, not combat troops, aiding Assad fight US supported terrorists. The Islamic Republic threatens no other countries, not Israel or any others.

Alliance of Convenience: Israel Supports Syria’s ISIS Terror Group
Fact: Israel actively supports ISIS, al-Nusra and other terrorist groups in Syria – in cahoots with Washington to topple Assad.
Fact: By its own admission, Israeli warplanes terror-bombed Syrian sites over 200 times in the last 18 months alone – allied with US aggression for regime change.
Fact: Israel gives aid and comfort to Al Qaeda terrorists, including by treating their wounded in a frontline field hospital in the Golan heights.
Fact: Israeli support for terrorists in Syria continues. The same goes for Washington and its other imperial partners.
According to FP, Israel provided terrorists in Syria with weapons, monthly salaries, and other material support.
The Netanyahu regime lied, repeatedly claiming Israel is not involved in the Syrian conflict. It very much remains involved, especially ahead of what looms to be the mother of all battles in the country to liberate Idlib province from thousands of al-Nusra and other terrorists. [60,000 according to recent estimates by Russia’s Ambassador to the UN, AFP, September 8, 2018]
Throughout much of the war, Syrian forces found foreign-supplied light and heavy weapons in liberated areas – including US and Israeli ones.
According to FP, Israel supplied terrorists in Syria with assault rifles, machine guns, mortar launchers, and vehicles – increasing its support in recent months since last year.
An unnamed terrorist cited and quoted by FP said anti-Assad fighters expected direct Israeli intervention to help and protect them, adding:
Israel’s failure to do it “is a lesson we will not forget…(The Jewish state) does not care about…the people. It does not care about humanity. All it cares about it its own interests.”
An unnamed “community leader” told FP:


“Trust me, Israel will regret its silence over what had happened in southern Syria.”
“We in our town and neighboring towns grudgingly reconciled with the regime, but this reconciliation will affect Israel in the near future.”

FP’s Elizabeth Tsurkov said she interviewed over two dozen members of “rebel” groups in Syria in preparing her report, saying:


“Israel has tried to keep its relationship with the groups a secret. Though some publications have reported on it, the interviews Foreign Policy conducted with militia members (sic) for this story provide the most detailed account yet of Israel’s support for the groups.”
“All the fighters spoke on the condition that their names and factions not be revealed,” adding:
“A spokesman for the Israeli Embassy in Washington declined to comment for this story.”

It’s an open secret that Washington and Israel partner in each other’s wars of aggression.
Both nations want the Middle East map redrawn, naked aggression and color revolutions their favored strategies for achieving their aims.
Tactics include wanting targeted countries partitioned for easier control, notably Iraq, Syria and Lebanon.
Middle East countries have over half the world’s proved oil reserves. In the 1940s, the State Department called access to them a “stupendous source of strategic power, and one of the greatest material prizes in world history.”
New millennium wars reflect Washington’s strategy for control over this vital resource. They have nothing to do with protecting US security.
Scrambling for scarce resources increases the chance for endless wars to secure them – in the Middle East and elsewhere, Venezuela a prime target for regime change by whatever it takes to replace its government with pro-Western puppet rule.
*

Stephen Lendman lives in Chicago. He can be reached at lendmanstephen@sbcglobal.net.
His new book as editor and contributor is titled “Flashpoint in Ukraine: US Drive for Hegemony Risks WW III.”
http://www.claritypress.com/LendmanIII.html
Visit his blog site at sjlendman.blogspot.com.
The original source of this article is Global Research
Copyright © Stephen Lendman, Global Research, 2018
Posted by RTR TRUTH MEDIA on September 10, 2018