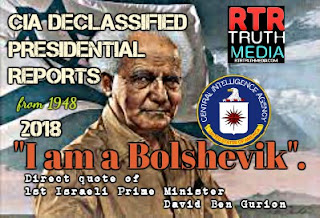 These are the findings of my research in the CIA reading room. What we were told about Israel and US recognition and support can now be seen through the eyes of what President Truman knew. We are working on a comprehensive article on the entire backstory, but wanted to share these images with the world to show that what we at RTR have been saying is not based on emotion or beliefs, but facts. We are anti-Communists anti-totalitarian. Israel has been the greatest redistribution of wealth scheme known to man and below you will see that this was anything but the authentic need of refugees.

- Jewish Immigrants reportedly Communist terrorists
- 80% of the Jewish emigrants shipped from Soviet controlled Black Sea Ports in a country that antisemitism is the death penalty and which leaving the country is illegal. This shows Moscow's direct agenda in sending.
- They were reported by the CIA to be Communists trained as terrorists 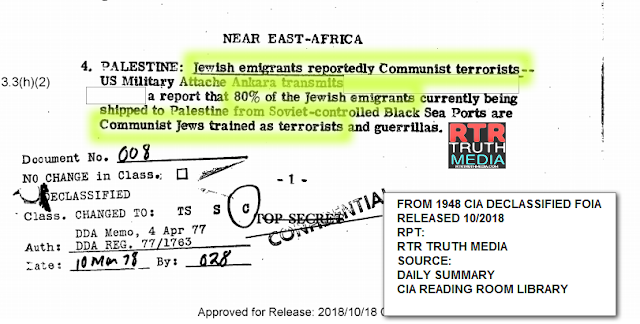 CIA reports
- Communist funded Paid Mercenaries  to head to Palestine with Irgun Z'vai Leumi
The following is a mainstream account of the Irgun with comments by me in red.

JEWISH RIGHT-WING UNDERGROUND MOVEMENT
What is reported as "Right Wing" is only the right wing of the Communists. This has mentally trapped more American conservatives into supporting outright Bolshevik Communists for decades.

WRITTEN BY:
The Editors of Encyclopaedia Britannica so consider the source and what they leave out
See Article History
Alternative Titles: Etzel, National Military Organization

Irgun Zvai Leumi, (Hebrew: National Military Organization)byname Etzel, Jewish right-wing underground movement in Palestine, founded in 1931. At first supported by many nonsocialist Zionist parties, (but that didn't last long since Israel required massive redistribution of American wealth and was founded by Bolshevik Communists) in opposition to the Haganah, it became in 1936 an instrument of the Revisionist Party, an extreme nationalist group that had seceded from the World Zionist Organization and whose policies called for the use of force, if necessary, to establish a Jewish state on both sides of the Jordan.

Irgun committed acts of terrorism and assassination against the British, whom it regarded as illegal occupiers, (which is laughable as they stole and occupied land from others) and it was also violently anti-Arab. Irgun participated in the organization of illegal immigration into Palestine after the publication of the British White Paper on Palestine (1939), which severely limited immigration. Irgun’s violent activities led to execution of many of its members by the British; in retaliation, Irgun executed British army hostages.

Irgun’s members were extremely disciplined and daring, and their actions included the capture of ʿAkko (Acre) prison, a medieval fortress that not even Napoleon had succeeded in capturing. In the last days of the British mandate, it captured a large part of the city of Yafo (Jaffa).

On July 22, 1946, in a FALSE FLAG ATTACK to BLAME ARABS and INCITE HATRED Irgun blew up a wing of the King David Hotel in Jerusalem, killing 91 soldiers and civilians (British, Arab, and Jewish). On April 9, 1947, a group of Irgun commandos raided the Arab village of Dayr Yāsīn (modern Kefar Shaʾul), killing about 100 of its inhabitants. This is known as the Lavon Affair or Operation Susannah

After the creation of Israel in 1948 Irgun’s last units disbanded and took the oath of loyalty to the Israel Defense Forces on September 1, 1948. Politically, it was the precursor of the Ḥerut (Freedom) Party, one of Israel’s most militant right-wing (but still Bolshevik groups), which later merged with the Liberals into the Gaḥal Party. See also Stern Gang.

THE CIA reports state the Reason for Arab anger was the Communists
Was not the United States fighting World Communism? 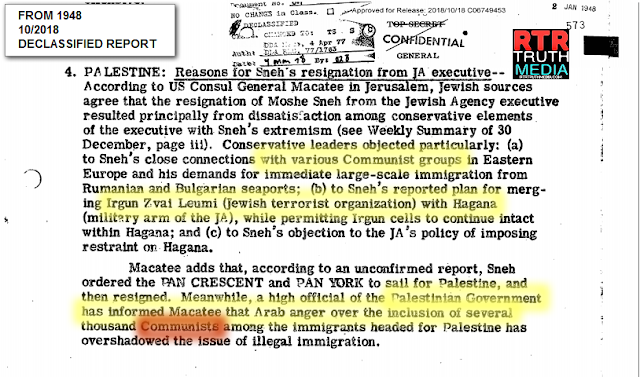 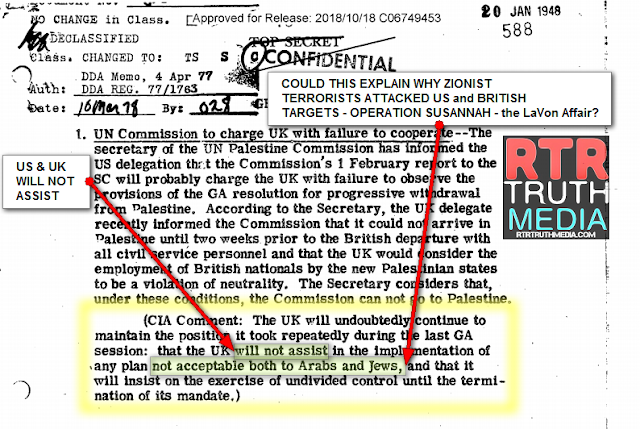 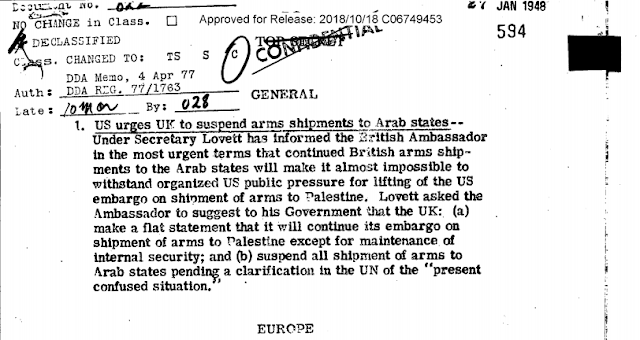 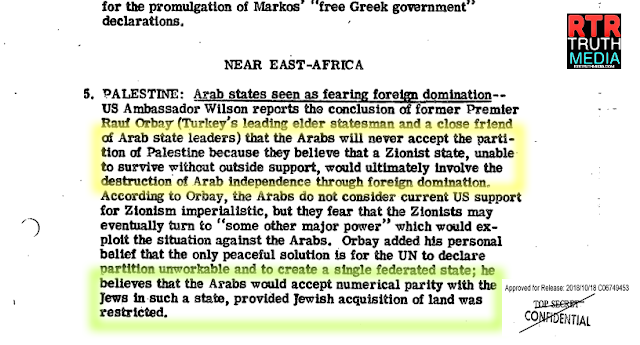 Arabs arrest Jewish Communist saboteurs.
The Arabs were fighting Communism while the US was supporting and funding it. 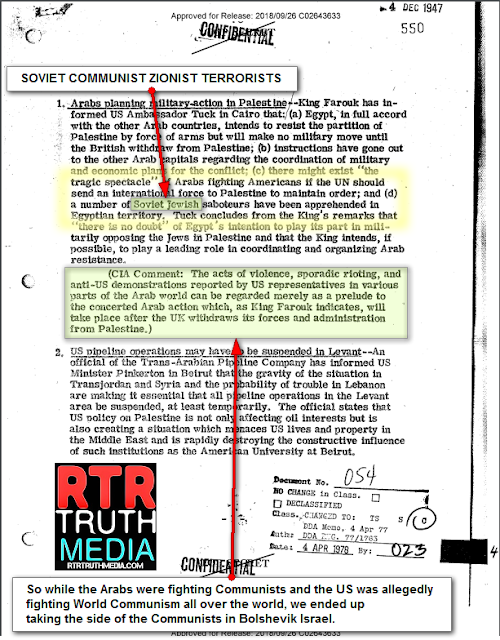 The only potentially peaceful position, rejected by the Bolshevik Zionists.
And then the land theft and terrorism continued. 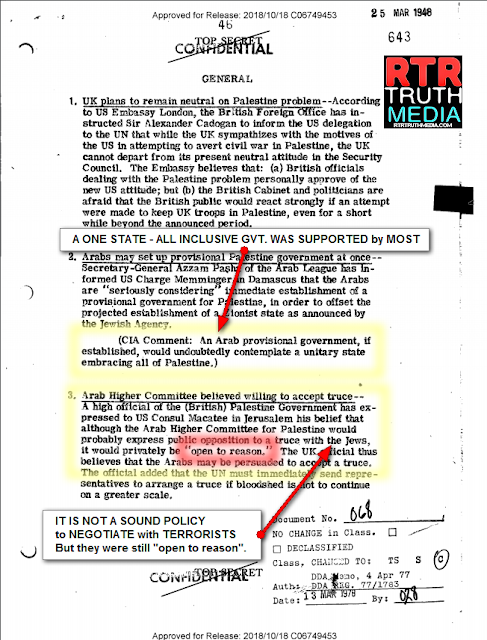 And here we see that not only was this a losing redistribution of wealth scheme placed upon the backs of America, but that even then and right away it was placing American lives and property in direct danger. 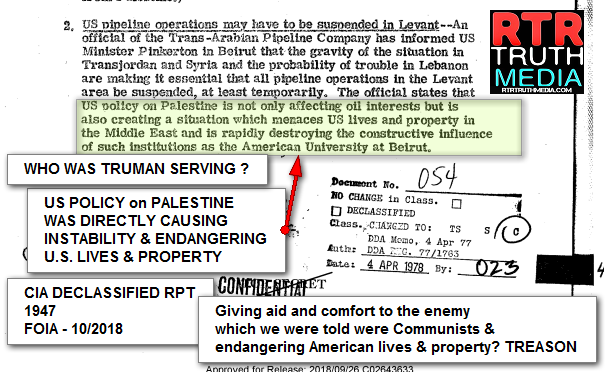 'The USSR Is Our Second Homeland,' Said One Kibbutznik When Stalin Died

Incredible as it may seem, Stalin's Soviet Union was once at the center of Israeli identity. - https://www.haaretz.com/.premium-nostalgic-for-the-ussr-on-the-kibbutzim-1.5233153
And it still is. The real Russian collusion story that no one wants to talk about.
Questioning it is a crime. Now you know why Communists devised the terms antisemitic and hate speech. Stop using those terms. They put forth a slew of those who identify as Jewish to do their deeds because of that protective layer. And its a trick.

Shulamit Aloni, former Israeli minister, admits that the holocaust and the "antisemite" accusation are used to manipulate those who criticize Zionists. This clip was from the 8/14/2002 democracy Now! broadcast.

Victor Ostrovsky explains the "anti-Semite" trick -- how Jews conspire together to silence critics of Israel, Jews and Zionism. The Soviets were brilliant. Their agents can go forward using this layer of protection anywhere in the world. And it places the lives of Jews in grave danger as the progenitors of this agenda could care less if everyday people are in danger as they are well armed, and well prepared terrorists.
Posted by RTR TRUTH MEDIA on December 14, 2018