Vape shop worker is FIRED after going on furious expletive-filled rant and refusing to serve a customer because he was wearing MAGA hat and Trump T-shirt.

Everyone who knows us here at RTR TRUTH MEDIA knows that as a Paleo-Conservative I am not a big fan of what the modern day Presidency, not the individual, but what the office has become. Since 1861 and the initiation of Martial Law Executive Orders and National Emergencies that undermine the Constitution, I have to abstain from any support of Federal intervention in most areas. Call me an anti-Federalist. But the derangement I have seen that comes from the far left is quite literally akin to or in fact, "mental illness".


A Georgia vape shop worker launched an explosive rant against a Trump-supporting customer and refused to serve him in a shocking incident all caught on video.

Ian Furgeson, 36, walked into Xhale City in Tucker on Friday to buy some items but quickly bumped heads with the store employee who asked him to leave just minutes after he entered the shop.

Furgeson, sporting a MAGA hat and Trump shirt, then whipped out his phone and began to record the incident.

'I have just been asked to leave the store. He greeted me, that was nice. Until he spotted my T-Shirt and MAGA hat. I did find the item that I wanted and the next thing he said was he'd like me to leave,' Furgeson said. And when asked why the expletives, name calling and hissy fit began.

The entire ordeal can be witnessed above.

Furgeson posted the video to Facebook with the caption 'Trump derangement syndrome strikes again', where it went viral racking up over 200,000 shares and 7.5million views.

The video sparked outrage among Trump supporters, but some say that the clerk was justified to ask Furgeson to leave. But in fact he was not justified. For the following reasons.

1- He is the clerk, not the owner and he was violating several company policies.
2- You can not refuse service to customers based upon a violation of 1st Amendment protected activity.
3- The selling of this product is not "artistic expression" that required this clerk to violate his personal beliefs. 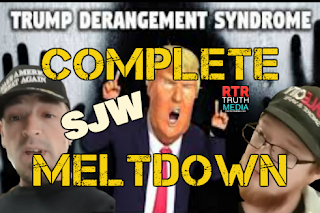 Now some have falsely compared this to the situation regarding the Christian baker who refused to decorate a cake with gay marriage art. The two situations can not be compared as the baker offered to sell the gay couple anything (including a cake) in the store. He merely refused to decorate the cake with his artwork (freedom of expression and religious beliefs). And the couple traveled over 150 miles, past dozens of secular run bakeries specifically to provoke the incident. In other words it was not an authentic organic incident, but a direct attack on the man's beliefs.

That situation and this are not remotely comparable. The clerk had mass manufactured items that had no need for him to violate his "personal beliefs" to accomplish selling. In fact the Trump supporters rights were violated under the equal protection clause. And he was assaulted in this incident. A fact that many left leaning news sources are reporting as "an attempt to knock the phone out of the man's hand", neglecting to mention that by doing so it constitutes assault and attempted destruction of private property.

The employee lost his temper and as I mentioned assaulted Furgeson while allegedly attempting to knock the phone out of his hand while saying: 'F*** off, f*** off dude. Get the f*** out of here. I f***ing can't stand y'all racist mother f***ers.'

Then he calls someone to complain about the customer and says: 'He's wearing some Trump bullsh*t...I'm not serving anyone that has to do with that f***er. I'm going to call the cops and have him leave.

The two go head to head, Furgeson ranting on about how he's not racist and how he wants to purchase a vape juice for his wife, speaking over the employee's plea for him to leave.

All the while a customer is waiting to be served looks on in amazement eventually telling the clerk, he man, this is about money not about you. Then the apparent racist according to the mental midget for a clerk looks to the black customer and says "I love ya man, I don't see race, I don't care about skin color". A fact the clerk completely ignores in his continuing delusion.

Furegson then says 'Just sell me the f***ing product so I can leave.'

The employee then gives in and fetches what he wants.

When Furgeson cheekily says 'God bless America. Capitalism wins again', the employee explodes and says 'F*** your capitalism. F*** your f***ing president. He's a racist stupid piece of sh*t. And thus shows his Communist colors of anti-Capitalism, while working in a for profit Capitalist store and while using an iPhone produced by a Capitalist corporation.....I could go on with the hypocrisy, but alas, I think you get the point.