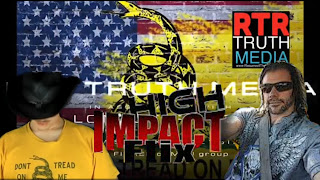 As YouTube has denied me an income we survive off of your support. please consider making a donation -
Donate - https://PayPal.me/RTRTruthMedia

Brian Young's links:
🔵 Get on my private Email List while this channel still exists: http://bit.ly/HighImpactFlixOfficial (don't forget to CONFIRM)

This is a video regarding one of the most important subjects we discussed:

Schaeffer Cox, a well known 2nd Amendment lobbyist who had won 38% of the vote in a State House election, became the subject of an intense FBI investigation after he angered State and Federal authorities by openly accusing them of drug trafficking and child prostitution.

Oil pipeline service company executive, Bill Allen, who had been spared prosecution on multiple counts of sexual abuse of minors in exchange for his 2008 testimony against pro-2nd Amendment Alaska Senator Ted Stevens, was among those implicated. “The State Wide Drug Taskforce supplied children for sex to a number of state and federal officials in exchange for those official’s cooperation in concealing the ongoing illicit drug trafficking activities of the State Wide Drug Taskforce,” Schaeffer Cox said.

Not long after these public statements, the same departments that Schaeffer Cox accused of corruption sent in numerous provocateurs to try to switch his efforts off of exposing corruption and on to violent vigilante-type actions. Schaeffer cox, who believes in non-aggression and voluntarism, can be heard on multiple undercover recordings telling the provocateurs, “No, I’m going to pull a Ghandi, NOT a Rambo” and “if we turn violent, people will see us as the bad guys.”

In what some have called a deviation from accepted investigative techniques, the FBI responded to Schaeffer Cox’s rejection of their violent proposals by creating a threat to his children that could serve as a motivator.

The story in full can be found here - https://rtrtruthmedia.blogspot.com/2018/12/the-schaeffer-cox-story-political-assassination-fbi-doj.html

JB Patterson is the one who put together Schaeffer's video.  He is the lead singer of JB and the Moonshine Band - He has asked any and all of us to share mirror and spread this video of truth to the masses. His video of the song he used in this mini-doc is right below....
Official Music Video for "Shotgun, Rifle, and a .45"
https://youtu.be/LT4YjbVv4ss