RTR TRUTH MEDIA - from the TIMES of ISRAEL - Report says the trip was planned to coincide with court’s approval of investigation on Afghanistan, in order to underscore joint US-Israeli interest in opposing The Hague 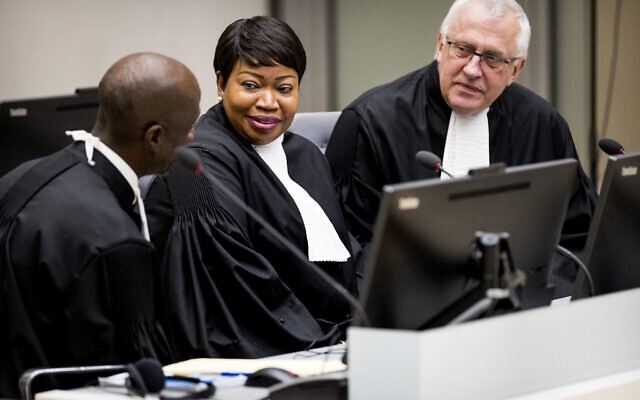 Prosecutor Fatou Bensouda, center, and Deputy Prosecutor James Stewart, right, attend the first audience with the chief of the Central African Republic's soccer federation Patrice-Edouard Ngaissona at the International Criminal Court (ICC) in The Hague, the Netherlands on January 25, 2019. (Koen Van Well/Pool photo via AP)
An Israeli delegation traveled to the United States this week for talks on coordinating a joint US-Israeli campaign against the International Criminal Court, Israeli television reported Friday.
According to Channel 13 News, the Israeli team landed in Washington on Thursday and was led by Energy Minister Yuval Steinitz, the cabinet member in charge of Israel’s efforts to counter a potential ICC investigation into alleged war crimes in the West Bank and Gaza Strip.
An Israeli official told the network the trip was timed to coincide with the ICC’s approval on Thursday of a war crimes probe in Afghanistan, as American anger over the decision, would underline that both the US and Israel have a common interest in opposing the court.


Steinitz, who was accompanied by Deputy National Security Adviser Reuven Azar, reportedly met with officials at the White House, State Department and Congress. An Israeli official said some of the meetings were with Democratic lawmakers, as Israel wants bipartisan backing against the court.
“The US has a lot of influence over the countries of the world and we want them to also put pressure on our matter when they are putting pressure on their matter and integrate us into their campaign,” the official said. 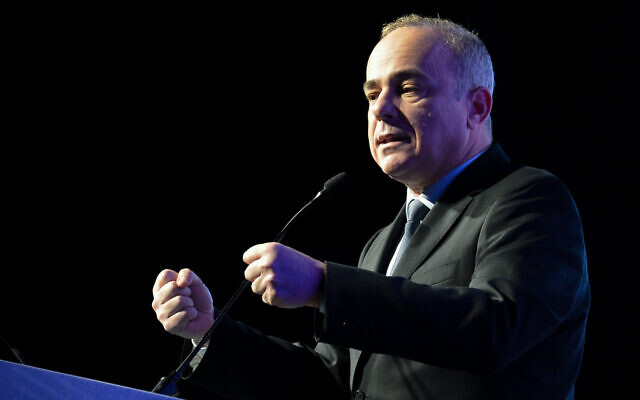 Energy Minister Yuval Steinitz speaks at a conference in Tel Aviv on February 27, 2019. (Flash90)
Fatou Bensouda, the ICC’s chief prosecutor, announced in December she had concluded her half-decade long preliminary examination of the “situation in Palestine” and has “reasonable basis to believe that war crimes were committed” by the Israel Defense Forces, Hamas and other “Palestinian armed groups.”
At the same time, she acknowledged that The Hague may not have the jurisdiction to deal with Israel/Palestine. Hence, she asked for a ruling by three ICC judges to determine the scope of the court’s territorial jurisdiction.
The prosecutor herself believes “Palestine,” which acceded to the Rome Statute, the court’s foundational document, in early 2015, is enough of a state for the purposes of transferring criminal jurisdiction over its territory to the court.
Israel has long argued that the ICC lacks jurisdiction over the case because there is no sovereign Palestinian state that could delegate to the court criminal jurisdiction over its territory and nationals.
It is now up to a so-called pre-trial chamber to rule on the matter. The three judges of this chamber — Péter Kovács of Hungary, Marc Perrin de Brichambaut of France and Reine Adélaïde Sophie Alapini-Gansou of Benin — invited “Palestine, Israel, and victims in the situation in the State of Palestine, to submit written observations” on the matter by March 16.
Germany, Australia, Austria, Brazil, the Czech Republic, Hungary and Uganda have submitted written documents to the court, each asking to become an amicus curiae — a “friend of the court” that is not a party to the case but wants to offer its views. They all posited that Palestine cannot transfer criminal jurisdiction over its territory to the ICC.
Not a single country filed a request to argue the opposite.
The ICC probe in Afghanistan will include investigations of war crimes and crimes against humanity allegedly committed by Afghan government forces, the Taliban, American troops and US foreign intelligence operatives.
The appellate ruling marked the first time the court’s prosecutor has been cleared to investigate US forces, and set the global tribunal on a collision course with the Trump administration.
Bensouda pledged to carry out an independent and impartial investigation and called for full support and cooperation from all parties.
Washington, which has long rejected the court’s jurisdiction and refuses to cooperate with it, condemned the decision while human rights groups and lawyers for victims applauded it.
“This is a truly breathtaking action by an unaccountable political institution masquerading as a legal body,” US Secretary of State Mike Pompeo said at a State Department briefing. “It is all the more reckless for this ruling to come just days after the United States signed a historic peace deal on Afghanistan, which is the best chance for peace in a generation.”
Though an investigation has been authorized, the prospect of suspects appearing in court in The Hague any time soon remains dim. Like the United States, Afghanistan also opposed the investigation.
Raphael Ahren and The Associates Press contributed to this report


Copyright Disclaimer Under Section 107 of the Copyright Act 1976, allowance is made for "fair use" for purposes such as criticism, comment, news reporting, teaching, scholarship, and research. Fair use is a use permitted by copyright statute that might otherwise be infringing. Non-profit, educational or personal use tips the balance in favor of fair use.
Posted by RTR Truth Media Staff on March 11, 2020