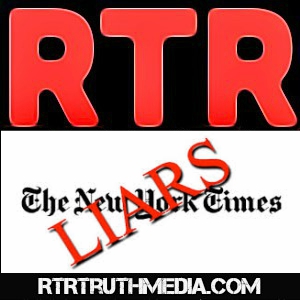 The article’s primary source was Chicks on the Right. Their sources appear to be Twitter posts and video.

Here’s what the NYT wrote about the article:

Trending: RIGHT WING NEWS Responds to Facebook Purge With EXPLOSIVE FACTS
“After Dr. Blasey testified, Right Wing News posted several false stories about her — including the suggestion that her lawyers were being bribed by Democrats… What Right Wing News did was part of a shift in the flow of online disinformation, falsehoods meant to mislead and inflame.”

After checking the RWN article, neither Right Wing News or RTR Truth Media found anything “false” about it, as the NYT suggests. The author merely questioned what was in the envelope that Rep. Lee handed to Ford’s attorney. The title of the story had nothing false in it, either.

Here’s what was in the RWN article:

“Why is a sitting Congresswoman even talking to this woman’s attorney let alone handing him an envelope? And what could be in that envelope? Instructions, a thank you letter, and an autographed picture, or maybe what sounds more probable … money? We can only guess at this point and I’m sure with a timid bunch as the Republicans are we won’t know anytime soon.
According to the Congresswoman’s press office, the envelope was simply unopened stationery notes given to counsel for Dr. Ford from women who wanted to enter the hearing room but were not allowed to enter. Why do I find this explanation so hard to believe?”

Questioning something is not “fake news.”

The source of the story is the Western Journal, and their source is Fox News.


“Over the past few months, Right Wing News’ Facebook page has increased its activity,

researchers said. During the time that then-Judge Kavanaugh testified in Congress, Right Wing News — and several Facebook pages that mirror it by posting the same content — pushed out numerous articles that questioned the veracity of a lie-detector test that Dr. Blasey had taken and why she had come forward with her accusations.”


Nothing in the RWN story was false. The veracity of the lie detector test Ford took was questioned by the author, and there is nothing wrong with questioning something.

As noted in the title and story, it was an ex-FBI agent who said polygraph tests can be beaten. The author also stated her opinion that Ford’s credibility is “swiss cheese.” With no witnesses corroborating her story, and with the changes to what she could recall, it could definitely be said her testimony regarding Kavanaugh, and even she herself, is not credible.


Nothing false there. It would just depend on who you asked. Ford’s supporters will of course say she is credible, which is their opinion, also.

Both stories were published on my day off so I did not fact check them at the time. Regardless, there is nothing false about them as the NYT suggests.

We at RTR Truth Media will be mailing this directly to the New York Times, to Facebook, and to our Federal and State representatives. Silencing people who ask questions and label them as progenitors of fake news, and now seeing real damage to their publication as a result, is unacceptable. Facebook in our opinion, has interfered with the flow of commerce, and violated the rights under the 1st Amendment of the freedom of the press, and quite possibly may be "interfering" in the election process. Facebook has on more than one occasion deleted posts by RTR regarding the campaign of Ryan Bundy for Nevada Governor. This is just scratching the surface as to our complaints.
Posted by RTR TRUTH MEDIA on October 12, 2018