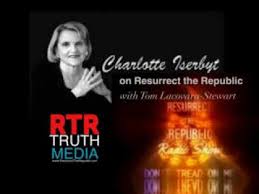 Americans are accustomed to sitting in front of "the box" and watching sitcoms or their favorite team vanquish its opponent. Recently it seems to this reader that they have added another sport to their list for viewing: POLITICS. They sit watching the nightly news and CNN's drumbeat to go to war, and they munch away on their high carb addictions and consume their favorite beverage as the agenda for the take over of their country passes by on the screen, clearly spelling out a "real agenda" which carries with it a totalitarian system of government being implemented in their back yard.

1. Religion of Secular Humanism (atheism) in schools. Man is an animal to be trained to do what the state requires. Dialectical materialism a la Marx/Lenin (Foster/Hiss/Chisholm). No right/no wrong.

3. COPS (Community Oriented Policing System). Police involved in community/schools, etc., in training citizens to spy on neighbors; use of TQM (Total Quality Management) to control our towns and cities (via block captains). Citizens in Bath and Brunswick, Maine area are being given medals (Pavlovian/Skinnerian rewards) through COPS for doing what police want done in the community! Data collection will include those who get rewards and those who don't get rewards. This program was initially implemented through the failed Drug Abuse Resistance Education (DARE) program which put police into schools with a program developed by the Justice Dept.

4. President Bush's Faith-Based Initiative (by Executive Order!) which will result in government control of churches and social services through money. This initiative now includes money for housing coming out of Housing and Urban Development. Bush's Faith-Based Initiative, school choice, COPS program, and community service will result in government control of Americans at the local level (churches, schools, towns, policing, etc.). The Soviet Union funded the Russian Orthodox Church in the same way which became the strong arm of the KGB.

5. Trojan Horse: School Choice/Vouchers, etc., which is also part of the international agenda - government control of all education through money. Federal legislation underlying and controlling any subsequent education legislation was adopted on July 18, 1971. "The Interagency Day Care Standards: Any agency, public or private, which receives federal funds directly or indirectly through a grant or contract...or by way of a voucher plan must meet all program requirements that are set down for public schools. Acceptance of Federal funds is an agreement to abide by the requirements." Federally funded Charter Schools include Virtual Academies, i.e. magnate schools (William Bennett). All these new and alternative forms of schooling are necessary to implement training in various jobs/professions (Soviet quota system). The traditional hierarchical school system, presently being deliberately crashed through choice proposals, are not suitable for work force training. They had to be abolished in order to implement the global planned economy with quotas for specific jobs.

6. Pavlovian/Skinnerian method. The Bush/Kennedy "No Child Left Behind Reading Initiative", mandates use of scientific research based instruction: Direct Instruction (D.I.) based on animal training, rewards, etc. According to Prof. Robert Glaser, leading behaviorist involved in Bush's reading initiative, D.I. "is not rote learning". "With rote learning one is allowed to make a mistake." With D.I. students are not allowed to make a mistake. That is why behaviorist educationists refer to this method as "what works". Giving your dog a biscuit when he sits also works. He will always sit if he knows he is going to get a biscuit. Is your child an animal? D.I. is necessary for STW (school-to-work) training, not education. Education is NOT a science.

7. Character/Civic Education (no right/no wrong) government training in government-approved values. This is also a part of the international curriculum. Mandated community service (forced slavery), with part of the emphasis on character, the same character education as mandated by Hitler, Stalin, etc.

8. Voluntary/mandatory Community Service. Citizens must serve the collective, the group, the state. (See above COPS reward system for "good" citizens)

9. International education system, which called for the US Department of Education, recommended by William Foster in Toward a Soviet America.

Bush/Kennedy's "No Child Left Behind" legislation (NCLB) mandates National Testing, which is 60% politically correct and politically correct national curriculum. Traditional teachers who don't get "results" (teach to test... accountability to international standards...limited learning for lifelong labor) will be fired. The UN Lifelong Learning plan carved in stone at "Education for All Conference" in Jontien, Thailand, in 1990." "Education for All" equals Goals 2000, STW, and Bush/Kennedy NCLB legislation. National Alliance of Business refers to this agenda as K-80. Really Pre-K-80 due to Early Childhood Education. Hillary Clinton's Health Care legislation, including mental health(school based clinics) going in the K-12 back door. Government is implementing the old Community Education agenda, in the works since the 1940's, which calls for UN's lifelong education plan under the umbrella of school districts run by un-elected councils (soviets).

10. Regional Government (national and global un-elected government: use of councils). Nixon carved this nation into ten regions. Communist Daily World, 1975, Morris Zeitlin article says that the USA is not moving fast enough towards a regional government; that it works so well in the Soviet Union. Gorbachev in London on 3/23/00 said: "European Union is New European Soviet" Stalin, at 1936 Communist International said: "Dictatorship can be established only by a victory of socialism in different countries or groups of countries," after which there would be federal unions of the various groupings of these socialist countries, and the third stage would be an amalgamation of these regional federal unions into a world union of socialist nations. A new world organization, United Cities and Local Governments (UCLG), is to be launched in January 2004, with headquarters in Barcelona, Spain. Their mission is to be a united voice and world advocate of democratic local self-government. UCLG will be the 'interlocutor' between local government and the United Nations. President Bush is implementing the same New American Soviet in this hemisphere with the regionalization of Canada, USA and Latin America and NAFTA/GATT. This new system calls for the redistribution of wealth through a common currency. Lenin's international socialism is the name of the game being played out today.

13. Land Use (Control of Land through regionalism/sustainable development, etc.)

Reader: What label would you put on the above agenda?

Charlotte Iserbyt is the consummate whistleblower! Iserbyt served as Senior Policy Advisor in the Office of Educational Research and Improvement (OERI), U.S. Department of Education, during the first Reagan Administration, where she first blew the whistle on a major technology initiative which would control curriculum in America's classrooms. Iserbyt is a former school board director in Camden, Maine and was co-founder and research analyst of Guardians of Education for Maine (GEM) from 1978 to 2000. She has also served in the American Red Cross on Guam and Japan during the Korean War, and in the United States Foreign Service in Belgium and in the Republic of South Africa. Iserbyt is a speaker and writer, best known for her 1985 booklet Back to Basics Reform or OBE: Skinnerian International Curriculum and her 1989 pamphlet Soviets in the Classroom: America's Latest Education Fad which covered the details of the U.S.-Soviet and Carnegie-Soviet Education Agreements which remain in effect to this day. She is a freelance writer and has had articles published in Human Events, The Washington Times, The Bangor Daily News, and included in the record of Congressional hearings.
Posted by RTR TRUTH MEDIA on October 02, 2018