On Resurrect the Republic with Tom Lacovara-Stewart a long anticipated conversation with Brendon O'Connell and Dr. Alan Sabrosky joining the RTR TRUTH MEDIA group RELOADED to discuss Israeli Tech world dominance, the Talpiot program and getting together a world conference to discuss these issues. 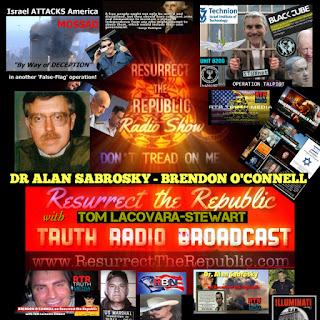 Alan Sabrosky (Ph.D., University of Michigan) is a writer and consultant specializing in national and international security affairs. In December 1988, he received the Superior Civilian Service Award after more than five years of service at the U.S. Army War College as Director of Studies, Strategic Studies Institute, and holder of the General of the Army Douglas MacArthur Chair of Research. He is listed in WHO'S WHO IN THE EAST (23rd ed.). A Marine Corps Vietnam veteran and a 1986 graduate of the U.S. Army War College, Dr. Sabrosky's teaching and research appointments have included the United States Military Academy, the Center for Strategic and International Studies (CSIS), Middlebury College and Catholic University; while in government service, he held concurrent adjunct professorships at Georgetown University and the Johns Hopkins University School of Advanced International Studies (SAIS). Dr. Sabrosky has lectured widely on defense and foreign affairs in the United States and abroad.

Dr. Sabrosky lays out the truth -


NEVER FORGET - This is just for those not informed.....
How many of you have heard this?
How many who deny there are things you have not been told about 9/11
These men were Israelis who were deported after detonating a bomb rather
than being charged and convicted.  This was intended to take out
the George Washington Bridge.              Wake up !!!