VIDEO CENSORED BY YOUTUBE - BUT THATS OK.....WE WERE PREPARED FOR THAT
THE VIDEO IS ALSO HERE ---> https://www.bitchute.com/video/Lm8TxKkVTG62/ 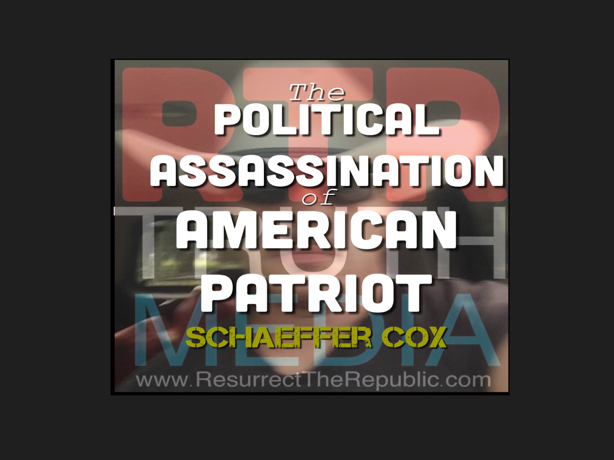 I have since standing for the Bundy family in Nevada, and for the plight of the Hammond family and economic terrorism of the people of Oregon, been contacted repeatedly by folks who have asked me to advocate for Shaeffer Cox. I have to be honest. At first I did not know who he was or what his story was all about. I was hesitant before researching all of the facts involved to rise to another cause as I have now lost over a year of my life in a Federal prison for what the progressive policies of Constitutional destruction call an "Interstate Commerce Clause" violation. Of course, in my opinion and that of many more, this is an abuse of the restriction upon government enshrined in the 2nd Amendment. I have no victim. I have not only not harmed anyone, but I have in fact stopped a robbery in the State of New Jersey and also a violent attack against a disabled senior citizen, none of which was or is relevant to the government. But being true to the cause of freedom, and after reviewing all of the facts, I have concluded that to not advocate for Schaeffer, would be a gross act of irresponsibility on my part. I take it from men whom I trust, that Shaeffer was set up, entrapped, and was given a kangaroo style court proceeding that excluded exculpatory evidence that showed a pattern of outright deceitful provocateur-ism on behalf of federal agents.

Similar to my case is the FACT that a known confidential informant placed items in a room she rented, and allowed me to use internet in, while then turning me in to the FBI command post. These FACTS can not be disputed. So I have direct personal experience with this type of behavior, which shows me that the facts in Cox's case is more than plausible.     Constitutional Conservatism is what is fully under attack, from progressives, Marxists, and the cult of government religion-ists.

Fear not evil, and speak the truth for as it says
Judges 7:3

Now therefore go to, proclaim in the ears of the people, saying, Whosoever is fearful and afraid, let him return and depart early from mount Gilead. And there returned of the people twenty and two thousand; and there remained ten thousand


The following link is the support page for Schaeffer Cox
https://freeschaeffer.com

Our video of Bruce Ray Riggs / Resurrect the Republic / Dirty Uncle Sam at the "09" Congress that Shaeffer also attended
Posted by RTR TRUTH MEDIA on January 12, 2018