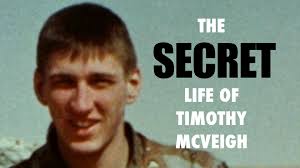 Timothy McVeigh. We've been told so much about him, the Oklahoma City bombing, and what it meant for America. But what if it's all a lie? Join us today for this special Corbett Report podcast-documentary as we examine the multiple trucks, multiple bombs, government informants, faked executions and other pieces of information suggesting that McVeigh was not a "lone wolf bomber" at all but a sheepdipped special forces operative working for the government, exactly as he claimed.

The following posts below the video Brian Young (HighImpactFlix.com) and I did by the Bureau of Alcohol Tobacco and Firearms lead me to delve back into a subject of great concern to many of us. Waco Texas Massacre that again leads me to share relevant information regarding Oklahoma City Bombing of the Murrah Federal Building. In this post, no mention of the men women and children who were incinerated or the military psychological torture they were forced to endure for still unsubstantiated claims. The result was a dumpster fire of mass proportions. I am shocked the posts are still up.


Please comment on these posts and tell them RTR said hi.

A fresh and in-depth look at the circumstances surrounding the 1995 Oklahoma City bombing.

But instead of accepting at face value the Federal Government’s deeply-flawed investigation, A NOBLE LIE features ground breaking information and eyewitness testimonies that refute the official story.

The April 19, 1995 bombing that destroyed much of the Alfred P. Murrah Federal Building involved far more revealing evidence than the FBI maintains.

A NOBLE LIE presents interviews with police officers, first responders, victims, journalists and investigators whose evidence demonstrates that not all the perpetrators were brought to justice.

Among the interview subjects are General Benton Partin, former head of weapons development for the Air Force, State Representative Charles Key, members of the Oklahoma Bombing Investigation Committee and Jesse Trentadue, whose brother Kenneth was tortured and murdered in Federal custody in the days following the bombing.

A NOBLE LIE is the only full-length documentary that addresses and answers many of the questions people have asked about the bombing. Details as to what really happened regarding this horrific event, taking the lives of 168 people, have been summarily covered up by the Federal Government. A NOBLE LIE re-examines the tragedy in a measured, informative and scholarly way, and in the process exposes the treachery that has gone unpunished.

Yes, Alex Jones does make an appearance in this documentary. But I am seriously in doubt that the film makers did this any more than for publicity purposes. I have some issues with Jones as my audience well knows. But the content of this film is very valid and needs to be seen. It is a quality product.

The following paper has but a few details that are questionable as to who McVeigh really was, but it has a wealth of information regarding Operation PATCON.
Informants Provocateurs and Entrapment - Examining the Histories of the FBI OPERATION PATCON and the NYPDs... by Tom Lacovara-Stewart RTR TruthMedia on Scribd