"For the love of God, and all that is just, we have a serious corruption, and the Federal down to local governments have "Titles of Nobility" that shield them from the law, essentially making them lawless. When the law itself becomes unlawful, it is time to "do something" about it ! All of the talk, the corrupted legal process, did nothing to protect innocent ranchers. And he highest Constitutional Officer in the county ABSOLUTELY DID have the authority, as well as responsibility to protect them. His actions should be regarded as negligent at best, but really Misprison of TREASON".

A Tale of Two 'Terror Arsonists' 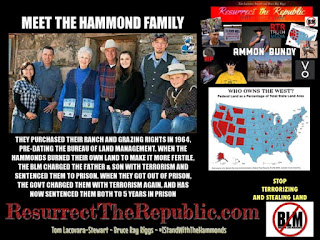 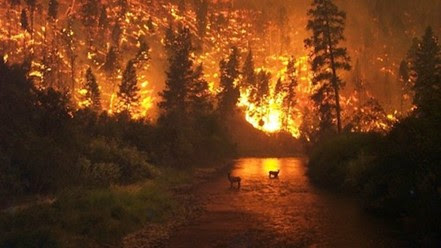 Our story today is about two very different "terror arsonists" who started fires on federally owned land. Although it is not certain in the first case whether the fire was lit on purpose, it ultimately burned more than 85,000 acres. The fire spread quickly, forcing many to evacuate their homes and destroying several cabins and out-buildings.The cost of containing the fire has reached over $20 million. At the time of this publication, no one has been prosecuted for this destruction of federal land even though there are many suspects.Pending a Federal investigation there are as of yet no property damage estimates by the federal government, but damage is said to be in the millions. The fire was started during a Bureau of Land Management (BLM) determined "high fire risk" day. Heavy, dense smoke filled the nearby valley, reducing visibility to less than a quarter mile. People at high risk with breathing disorders, the elderly, and children were recommended to stay inside their homes. Residents were told to avoid any rigorous work in the outdoors. The local borough also set up a safe house for people with respiratory conditions. This massive fire occurred here in Fairbanks, Alaska two years ago. To this day there has been no prosecution of anyone who started it.Why?Because it was started by the US military during a training exercise. The fire was started even though the BLM did not grant the military a waiver for conducting the live fire exercise and the Fire Chief on Ft. Wainwright recommended that they hold off on the exercise.This fire caused serious harm to the people of the Fairbanks North Star Borough, and breathing was extremely difficult for several weeks as a result.But, there were never any criminal prosecutions for the fire.Contrast this to the Hammonds in rural Oregon, two of whom, after being charged using an anti-terrorist law with mandatory minimum sentencing, are serving a five year prison sentence and facing a $400,000 fine. According to the sentence, if the fine is not paid the BLM can seize the ranch and sell it on auction, with the BLM itself having first right of refusal to purchase the property.Why?Because the Hammonds started a back-fire to protect their home from a lightning fire, which, although it did stop the lightning fire from burning their home -- and also stopped the fire from potentially burning thousands of acres of BLM "owned" land -- incidentally burned approximately one acre of BLM land!Who, in America, are actually the domestic terrorists?Reprinted with permission. A version of this article appeared on the Patriot's Lament website.
Posted by RTR TRUTH MEDIA on January 11, 2016