Samuel Girod was sentenced last summer to 6 years in prison for various charges relating to the manufacture and sale of herbal products, including a salve which the Kentucky Amish farmer claimed could be used to treat cancer, among other ailments. He has no victim or any damages reported by anyone, yet he has been jailed for years and now denied an appeal. While many politicians such as Anthony Weiner get 21 months for crimes involving sexual misconduct with children, and many other top politicians with crimes that have caused death and destruction, this would seem to persecute people like this should be seen as an indictment that real tyranny has arrived.


Girod was convicted for charges including “conspiring to impede the FDA, a very similar sounding charge as we heard in the Bundy Trials by the way; failing to register his facility with the agency; which in our opinion based on his "freedom of religion" he was not required to do for a variety of reasons we will articulate on the Resurrect The Republic Radio Show; threatening a witness to try to keep business documents away from the grand jury; which I have not seen evidence of at this point.

If you believe the same federal government who has falsely alleged that marijuana has no medicinal properties (basically destroying their credibility), he is also apparently guilty of what the government itself has been guilty of for many years with psychotropics, distributing misbranded drugs.” The difference is this man has no victim. Start looking deeply into psychotropics and you will not only find victims but rivers of blood.

Keep in mind that according to their faith most Amish do not believe in the use of pharmaceutical drugs. Some have relented when in absolute life threatening situations. They believe in all natural cures for as much as humanly possible.


Some of Girod’s products included language such as “Cures Cancer”, as well as “very good at removing tumors”. A simple re-labeling of "helps" should at most been required. As I have seen many natural remedies that help with this process in a variety of ways and do not seek a nanny state endorsement or permission slip. "Not Approved by the FDA" could have been added to the label, but of course my idea of a label like that would be followed "but who cares, I mean, it's the FDA after all".

As he did during the initial case, Girod acted as his own attorney for the appeal.

The Amishman claimed that U.S. District Judge Danny C. Reeves “erred by not dismissing the charges against him because his products were not drugs; that Reeves gave improper instructions to the jury; that Girod suffered selective prosecution based on his religion; and that Reeves was biased against him.”

So to be clear, this case is over "labeling what he believes" as opposed to what the nanny state determines is appropriate. The same state that has no problem with tax money going to Planned Parenthood and the cessation of life of the unborn, or Big Pharma subsidies, many companies which have injured hundreds of thousands of people with bad drugs in the past.

The arguments were to no avail, as the three-judge appeal panel rejected the appeal.

The public reaction at the time of his sentencing was strong. In the video below, activist and former Sheriff Richard Mack makes an emotional apology to Girod “on behalf of the United States of America.”

Another man argues that “there are no victims, there’s only…mutual benefit in this case.”
Prior to his sentencing, fifty fellow Amish from his home settlement in Bath County, KY
appeared at the state capitol.
His case reached far beyond his local community, however, with over 25,000 signing a petition for his release.
. 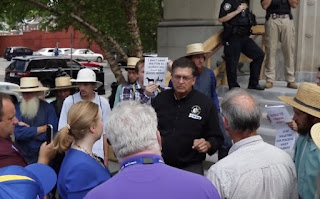 Richard Mack and other supporters of Girod.
Image source: Lexington Herald-Leader
There is no note in the latest piece as to whether further appeal possibilities exist.
Girod is scheduled to go free in April 2022.
Posted by RTR Truth Media Staff on May 30, 2018