Not that it hasn't taken long enough, but finally the hammer drops on the leftist anti-Christian hate mongering group - the Southern Poverty Liars Center who paints any Constitution loving or Christian American a hater. It's actions have brought upon the American people persecution, and violence. It is long passed time they have been put in their place. A.G. Jeff Sessions may be the subject of much controversy, but it appears as though he hit the nail right on the head this time.

Written by Alex Newmanl in the New American 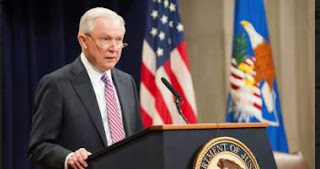 Shortly after the news broke that the Federal Bureau of Investigation (FBI) still maintained some ties to the Southern Poverty Law Center (SPLC) — a far-left fringe group widely condemned as an anti-Christian “hate group” by critics — Attorney General Jeff Sessions dropped the hammer. Speaking in front of a mainstream Christian group of pro-freedom attorneys maligned by the SPLC, the Justice Department chief pledged that the DOJ would not be partnering with any organizations that unfairly slander or discriminate against Americans for their faith. Everybody, including the SPLC, knew exactly who Sessions was talking about — the SPLC, of course.

While the radical group has become increasingly discredited and marginalized in recent years, the attorney general's comments may represent the final nail in the coffin for whatever credibility the SPLC might have still possessed among law enforcement. After all, this is an organization thatsmeared a Muslim as a leading “anti-Muslim extremist,” a black law professor as an enabler of white supremacy, and a Cherokee Indian married to a descendant of Sacajawea as the “matriarch” of a vast “anti-Indian movement.” But despite being ridiculed nationwide, with close to half a billion dollars stashed away, some of it in offshore accounts, the SPLC can still do a lot of damage.

Sessions dropped the bombshell comments in a speech to the Alliance Defending Freedom (ADF). The influential organization of Christian attorneys has secured multiple victories at the U.S. Supreme Court including, most recently, while defending a Colorado baker from LGBT extremists in Colorado demanding that he bake them a pro-LGBT cake for a homosexual “marriage.” Because of ADF's position on sexuality — basically the traditional Christian view that people all over the world throughout virtually all of human history have held — the group has been libeled as a “hate group” by the SPLC. But according to Sessions, the DOJ will no longer be helping the SPLC and the LGBT movement to terrorize Christians and other believers.

Speaking at the ADF's Summit on Religious Liberty, the U.S. attorney general gave encouragement to Christians everywhere. “People of faith are facing a new hostility. Really, a bigoted ideology which is founded on animus towards people of faith,” he explained. “You’ll notice that they don’t rely on the facts. They don’t make better arguments. They don’t propose higher ideals. No, they just call people names — like ‘hate group.’ Does that sound familiar?” Sessions went on to suggest that the SPLC once did important work, pointing to its anti-KKK activities decades ago. But today, the group has gone off the rails.

“When I spoke to ADF last year, I learned that the Southern Poverty Law Center had classified ADF as a ‘hate group’,” Sessions continued. “Many in the media simply parroted it as fact. Amazon relied solely on the SPLC designation and removed ADF from its Smile program, which allows customers to donate to charities. They have used this designation as a weapon, and they have wielded it against conservative organizations that refuse to accept their orthodoxy and choose instead to speak their conscience. They use it to bully and intimidate groups like yours which fight for the religious freedom, the civil rights, and the constitutional rights of others.”

The SPLC was not amused. “The Alliance Defending Freedom spreads demonizing lies about the LGBT community in this country and seeks to criminalize it abroad,” claimed SPLC President Richard Cohen in an angry letter to the attorney general. “If the ADF had its way, gay people would be back in the closet for fear of going to jail. It’s inappropriate for the nation’s top law enforcement officer to lend the prestige of his office to this group. And it’s ironic to suggest that the rights of ADF sympathizers are under attack when the ADF is doing everything in its power to deny the equal protection of the laws to the LGBT community.”

The SPLC refuses to accept that Christians, Jews, and Muslims take their scriptures seriously on the matter of homosexuality. Indeed, the SPLC is so radical that it works to normalize and promote homosexuality to young children as part of its “Teaching Tolerance” program. And it ruthlessly demonizes anyone who holds views held by virtually every society, culture, and religion in all of human history — namely, that homosexuality is unnatural and sinful, and that it is possible for people to leave behind that lifestyle.

Despite the SPLC's furious attack, Sessions was exactly right. As this magazine has documented extensively, the SPLC has increasingly been labeling everyone with whom it disagrees with some odious or noxious label. Practically everyone to the right of Obama and Bernie Sanders has been libeled as a hater, extremist, conspiracy theorist, or some other term. Indeed, even people who hold the same view on marriage that Obama claimed to hold when he ran for office have been described as “radical right” by the SPLC.

The soft-spoken U.S. Secretary of Housing and Urban Development Ben Carson, meanwhile, a harmless Christian and pediatric neurosurgeon, was smeared as an “extremist” by the SPLC for defending marriage. The John Birch Society, which publishes this magazine, has been dubbed “chief” of the “Patriot” movement by the SPLC, which uses the term Patriot in a derogatory manner. Countless other groups and individuals have also found themselves in the SPLC's cross hairs simply for holding mainstream views shared by billions of people around the world and hundreds of millions of Americans.

Ironically, perhaps, despite the smearing of everyone else, SPLC founder Morris Dees was accused in court documents of sexually abusing his stepdaughter. Separately, the SPLC hasshowered praise on a known communist terrorist whose Cuba-backed group bombed federal targets, slaughtered police, and more. Even leading leftists are now speaking out against the money-making SPLC scam.

One Christian group maliciously labeled as a “hate group” by the SPLC, the non-profit Family Research Council, found out the hard way how dangerous the SPLC's propaganda can be. In 2012, the group's Washington, D.C. headquarters was attacked by a deranged LGBT terrorist who was planning to massacre employees with a gun and then smear Chick-Fil-A sandwiches all over his victims' faces. After being stopped by a heroic security guard and arrested, the terrorist told the FBI that he had relied on SPLC's hate propaganda.

Sessions explained that, even if he does not agree with ADF on everything, “I wanted to come back here tonight partly because I wanted to say this: you are not a hate group.”

Sessions' comments came after the FBI, part of the DOJ, sparked a national outcry after it was revealed that the agency was still using the SPLC as a resource despite removing it from its website after previous scandals. Last month, Fox News host Tucker Carlson exposed the ongoing ties, with an FBI representative admitting that the agency still had some sort of “relationship” with the SPLC. Lawmakers were outraged. And the DOJ quickly sprang into action, promising that Sessions had ordered the FBI to review its relationship with such organizations to ensure that it does not partner with any group that “discriminates.”

In his latest speech, Sessions confirmed that yet again, promising Americans that anti-Christian bigots would not have the ear of the nation's justice system. “I have ordered a review at the Department of Justice to make sure that we do not partner with any groups that discriminate,” Sessions explained. “We will not partner with groups that unfairly defame Americans for standing up for the Constitution or their faith.” The speech to ADF came about a week after another fascinating speech by Sessions celebrating religious freedom and the enormous contributions made by Christians and other faithful.

In both speeches, the attorney general also promised that the federal government would never attempt to force Americans to compromise their faith. “In all of this litigation and debate, this Department of Justice will never allow this secular government of ours to demand that sincere religious beliefs be abandoned,” he told ADF. “We will not require American citizens to give intellectual assent to doctrines that are contrary to their religious beliefs. And they must be allowed to exercise those beliefs as the First Amendment guarantees. We will defend freedom of conscience resolutely. That is inalienable. That is our heritage.”

Sessions also announced last week the creation of the “Religious Liberty Task Force.” The body is designed to help DOJ protect religious liberty in the cases it litigates. While announcing the move, the attorney general also warned that “a dangerous movement, undetected by many, is now challenging and eroding our great tradition of religious freedom.” The decision was widely praised by Christians and others across the political spectrum, but extreme LGBT voices expressed outrage, saying Sessions was trying to give Christians a “license to discriminate” by, for example, not having to affirm homosexual “marriages.” Sessions also celebrated that nuns would no longer be coerced by the feds to buy birth control.

Sessions' recent actions and words were welcome news to embattled conservatives and Christians after eight years of attacks by Obama. But unfortunately, Sessions' comments are actually a sign of how far the enemies of morality, liberty, and Western Christian civilization have come. It was not until 2003 that the Supreme Court unlawfully usurped the power to overturn anti-sodomy laws in Texas and all other states. By 2015, the out-of-control court invented a “right” to a “homosexual marriage,” in total violation of the Constitution, and sought to impose it on all Americans. By the end of Obama's term, government literally was terrorizing and jailing people who declined to affirm such “marriages.”

Sessions announcing that the DOJ would no longer partner with anti-religious bigots and discredited anti-Christian hate groups to bully and terrorize Christians is hardly a major victory. But hopefully, it will represent the first of many steps in the right direction.

Alex Newman is a correspondent for The New American, covering economics, education, politics, and more. He can be reached at anewman@thenewamerican.com. Follow him on Twitter @ALEXNEWMAN_JOU or on Facebook.

Acting Like a Hate Group, SPLC Pays Large Settlement and May Be Sued Further

SPLC Unhinged: Almost Everyone Is a “Conspiracy Theorist”

On Nullification, Sessions and DOJ Get it Wrong

After D.C. Shooting, SPLC, Planned Parenthood, and the Feds Under Fire