It has come to our attention that an online group of ill informed reactionary trolls on Reddit has engaged in a deliberate harassment and false flagging campaign on YouTube against a conservative activist Adam Green of Know More News, who shares his views on Zionism and a very real problem among the Jewish community of those who believe they are supreme above all others. Adam Green is also someone who believes in the non aggression principle, so claiming he is in any way advocating violence, threatening, or harassing anyone is a bald faced and blatant lie. His criticism only reflects such upon a portion of Jews and non-Jews who advocate for political Zionism primarily of the Likud variety in particular.

The numbers of Jews themselves that oppose this supremacist ideology are many. And many Jews themselves acknowledge that it is among those supremacists that are the direct cause of what is called modern Antisemitism. Their use of this term is a complete abuse of the word itself as the definition of Antisemitism is:

: hostility toward or discrimination against Jews as a religious, ethnic, or racial group


So let us first identify that Mr. Green criticizes ideological perspectives that he believes and puts evidence forth to show how said ideologies enable a rationale of thinking that causes injury and harm to others. We will begin with the evidence collected in his report compilation of Main Stream reports and articles : To oppose such ideologies that are "among" Zionist and some sects of Jews, is in no way showing hostility to or discriminating against any religious, ethnic, or racial group in it's entirety. And as to the racial aspect, being Jewish is not a race. Political Zionism is political ideology infused with "aspects" of Jewish identity, but none the less is a political ideology. If Mr. Green did not openly have friends as I do who were Jewish, who respected him, and who also agreed with his presentations, then perhaps we could explore him being anti-Semitic. Seeing how he interviews politicians running for Knesset, as well as many Jewish Americans, these allegations against him are not only unfounded, but come from a place of hatred and loathing. Let us explore the actual attacks.
Below is a tweet from Adam Green regarding the faux outrage campaign. Why do I say faux outrage? Because people are being deliberately sent to the Know More News channel who have admittedly not seen, listened to or have been offended by any of the content. This is not harassment of them. This is the exact reverse. They as folks who identify as Jews, without sitting through the content and without providing facts to counter that of Mr. Green are moving to complain and flag videos they have never watched as you will see in the below image and in Know More News tweet. This is the abuse of the YouTube terms of service should they engage in this pattern of harassment. They are free to create content of their own to counter Mr. Green's presentations.


A Jewish group on Reddit is organizing a mass flagging campaign to shut down my YouTube and Patreon. They aren't happy about our trip to Palestine @morphonios. They can't allow the truth to be known. Their censorship will never end!!!#BDS #Zionism https://t.co/QywtkANpYo pic.twitter.com/GBWNIz4HHN
— Adam Green (@Know_More_News) November 4, 2018

The most blatant of the photos Mr. Green has shared is the following: 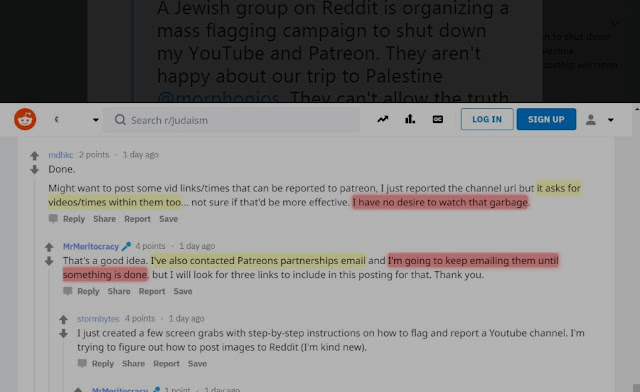 Within this sub Reddit you can easily see that those who are engaged in this campaign have not watched Mr. Greens YouTube content, offer no facts of their own to prove that anything he presents is false, and are simply invoking a smear tactic buzz word to try and commit acts of economic terrorism and personal damage against him by using an online process. This is known in law as "cyber-bullying" and is a crime.
Cyberstalking

Federal law makes it a crime to "transmit in interstate commerce" (which includes the internet) a communication containing a threat to kidnap or physically harm someone.
Criminal harassment is usually confined to state law. States vary in how they define criminal harassment. Generally, criminal harassment entails intentionally targeting someone else with behavior that is meant to alarm, annoy, torment or terrorize them. Not all petty annoyances constitute harassment. Instead, most state laws require that the behavior cause a credible threat to the person's safety or their family's safety.
When targeted online harassment includes behavior that causes harm regardless of it being physical or financial it is a crime. It is a deprivation of rights.
While Mr. Green is critical of Israeli policies and while he does research and investigate ideologies that cause people to believe that they have a higher right to themselves than to Palestinians, and while these subjects are of much contention, when we allow those to use smear tactics to silence and damage we resign to entire populations the potential subjugation of those who are given this protective unreasonable layer. As a Christian conservative myself it has taken me years to understand the nature of the very real religious aspects to the war of ideologies. This online group has compared Mr. Green to the Pittsburgh Synagogue shooter regardless of the fact that they apparently have no clue that Mr. Green is a non aggression principle advocate and that he condemned any violence against any people absolutely and completely. To compare him with a homicidal attacker because that attacker espoused beliefs that opposed Zionism is disgusting, inflammatory and defaming. And in the way it is being used in this cyberbullying attack, it is merely being used as a trick to get tech companies to falsely penalize Mr. Green. They allege that Adam Green is "clearly in agreement with the person who shot up a synagogue on Saturday", while not only not providing any facts to support this, but openly admitting the refusal of actually watching the content they refer to as seen in the image above. This proves them to be openly dishonest. Some of the information that the shooter disagreed with is open source facts he opposed. This in no way justifies a homicidal attack which is the "actual" crime he committed. What he thought or believed is irrelevant and again used as a tactic to suppress actual facts. In fact I posit that by allowing thought crimes to be weaponized in this way will only fuel their misuse by those who wish to silence. In other words you will have those who oppose something committing acts of false flag violence to kill the message rather than go after real crimes of violence as is a provable fact seen in Green's presentation "The Truth About AntiSemitism".

Here is a quote directly from Adam Green :

"The killing of anyone especially while they are worshiping is disgusting and should not be tolerated".


Chapter 24. Breaking Away From the Bolshevism

Why should not the Jewish question exist — the question of the unprecedented three-thousand-year-old existence of the nation, scattered all over the Earth, yet spiritually soldered together despite all notions of the state and territoriality, and at the same time influencing the entire world history in the most lively and powerful way? Why should there not be a “Jewish question” given that all national questions come up at one time or other, even the “Gagauz question” [a small Christian Turkic people, who live in the Balkans and Eastern Europe]?

Of course, no such silly doubt could ever arise, if the Jewish question were not the focus of many different political games.

The same was true for Russia too. In pre-revolutionary Russian society, as we saw, it was the omission of the Jewish question that was considered “anti-Semitic.” In fact, in the mind of the Russian public the Jewish question — understood as the question of civil rights or civil equality — developed into perhaps the central question of the whole Russian public life of that period, and certainly into the central node of the conscience of every individual, its acid test.

With the growth of European socialism, all national issues were increasingly recognized as merely regrettable obstacles to that great doctrine; all the more was the Jewish question (directly attributed to capitalism by Marx) considered a bloated hindrance. Mommsen wrote that in the circles of “Western-Russian socialist Jewry,” as he put it, even the slightest attempt to discuss the Jewish question was branded as “reactionary” and “anti-Semitic” (this was even before the Bund).

If one listened to American radio broadcasts aimed at the Soviet Union from 1950 to the 1980s, one might conclude that there was no other issue in the Soviet Union as important as the Jewish question. (At the same time in the United States, where the Jews “can be described as … the most privileged minority” and where they “gained an unprecedented status, the majority of [American Jews] still claimed that hatred and discrimination by their Christian compatriots was a grim fact of the modern life”3; yet because it would sound incredible if stated aloud, then the Jewish question does not exist, and to notice it and talk about it is unnecessary and improper.)

We have to get used to talking about Jewish question not in a hush and fearfully, but clearly, articulately and firmly. We should do so not overflowing with passion, but sympathetically aware of both the unusual and difficult Jewish world history and centuries of our Russian history that are also full of significant suffering. Then the mutual prejudices, sometimes very intense, would disappear and calm reason would reign.

So in conclusion, it is only with the ability to criticize that hostility can be circumvented. It is only through open discourse that will provide remedy for anger that would arise from the suppression of speech be mitigated. Silencing people is precisely what causes them to become alienated, bitter, resentful, and thus some to take the next step which is to lash out.

The majority of the fervor in support of antisemitism as we know it today began in great strength (was used) to silence the criticism of Bolshevism and Communism while Marx and his allies attacked everything Capitalistic, and faith based. They attacked traditional values. Odd for a man who while born Jewish was by religion Christian until rejecting religion altogether while openly stating he sought to "undo the dominion on the One from above", meaning to overthrow the concept of the Creator and everything and everyone that stands for it. Anti-semitism when used simply to silence those who give legitimate criticism to certain aspects of ideologies is an overtly Communistic concept. It is "thought crime" which is at it's root un-American and illogical.

In the U.S.S.R. anti-semitism is punishable with the utmost severity of the law as a phenomenon deeply hostile to the Soviet system. Under U.S.S.R. law active anti-semites are liable to the death penalty.
J. Stalin
January 12, 1931
Posted by RTR TRUTH MEDIA on November 05, 2018